Not even Odysseus can cross this gargantuan monitor.

If you’re looking for the best Samsung Odyssey G9 gaming monitor deals this Black Friday, then you’ve come to the right place.

You won’t be missing out on any Samsung Odyssey Black Friday deals this year, as our in-house deals team will be scouring the web to bring you the biggest and best offers through till December.

This high-end gaming monitor from Samsung offers some amazing performance that includes a blistering 1 millisecond response time and rapid 240Hz refresh rate – providing users with a lucid visual experience that is great for both gaming and everyday usage.

With specifications like this, you can be sure that investing in this monitor will provide you with some of the best gaming performance on the market – only beaten out by the other monitors in Samsung’s G9 series. The G9 also comes with the added benefit of the curved-screen to reduce eye strain during intense gaming moments, so you can keep gaming for an extended period of time without making your eyes bleed.

So, let’s waste no further time and dive straight into the best Samsung Odyssey G9 deals this Black Friday:

Samsung is easily one of the biggest display manufacturers on the market. For this reason, they often push deals throughout the year on some of its best-selling products.

The G9 is arguably the flagship monitor they design, meaning we’ll likely see some big deals between now and Black Friday on it.

Not only that, with a new G9 Neo edition released this year, we could see massive savings on the aging varients.

Finding the best deals on Samsung monitors between now and December can be a tricky little prospect – especially if you aren’t fully up to speed with all the latest Black Friday hype.

Fear not though, we’re going to outline the best retailers across the web that never disappoint when it comes to a smoking hot Black Friday Samsung deal: 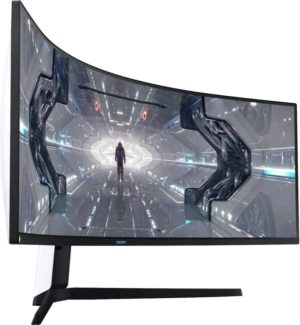 In terms of reduction, there’s a decent chance for good savings here. During Black Friday 2021, this monitor saw a reduction of over $600 dollars, making it one of the best high-end gaming monitor deals you could find.

If this monitor’s popularity has held out during 2022, then we could potentially see an even bigger reduction this year.

Another important factor here is the release of the Neo G9 monitor with even more advanced features. With a newer edition on the market, the original G9 could see an even bigger price drop, with any luck.

How much will the Samsung Odyssey G9 Gaming Monitor be on Black Friday 2022?

I suppose that all comes down to what model you’re looking for.

Right now, the Samsung Odyssey G9 Neo is on offer with a $500 price reduction. However, with Black Friday saving the best deals till the end of November, we could see up to $1000 off this impressive gaming display.

Older variants of the monitor will likely see slashed prices as well, albeit not to the same level.

When will Samsung Black Friday deals begin in 2022?

Samsung’s Black Friday campaign will officially launch on the 25th of November this year, meaning we’ve still got some ways to go.

Having said that, Black Friday deals often go live a few weeks before the official weekend – with big retailers slashing prices as early as November 1st.

After some more Black Friday deals? We’ve got you covered.